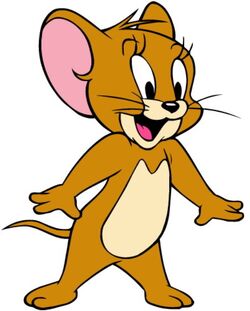 Jerry is one of the main characters in Tom and Jerry.

Jerry is a shy and tiny mouse - but don't let his appearance fool you. He is clever, sneaky and charming.

Puss_Gets_The_Boot-Early_Jerry.png|Jerry's first appearance, unnamed, but named in-studio as "Jinx," in "Puss Gets The Boot". Jerry-Chuck_Jones.png|Jerry in the Sib Tower 12/MGM Visual Arts era!

Retrieved from "https://metro-goldwyn-mayer-cartoons.fandom.com/wiki/Jerry_Mouse?oldid=5562"
Community content is available under CC-BY-SA unless otherwise noted.