The Early Bird Dood It!

Blitz Wolf is a 1942 cartoon directed by Tex Avery.

The plot is a parody of the Three Little Pigs, told from a Second World War anti-German propaganda perspective. In this cartoon, the pigs go to war against Adolf Wolf (Adolf Hitler), who is set on invading their country, Pigmania. The two pigs who built their houses of straw and sticks claim they don't have to take precautions against the wolf, because they signed non-aggression pacts with him. The pig who built his house of stone, "Sergeant Pork" (an homage to Sergeant York), does take his precautions and outfits his house with defense machinery.

Adolf Wolf invades Pigmania, despite the two pigs protesting that he signed a treaty with them. He destroys their houses, whereupon the pigs flee to the third pig's house. Then the Wolf and pigs start fighting. Towards the end of the cartoon, Adolf Wolf is blown out of his bomber plane by the pigs' artillery shells filled with Defense bonds and falls down to Earth, together with a bomb which blows him to Hell. There he realizes he is dead and says: "Where am I? Have I been blown to... ?", whereupon a group of devils adds: "Ehhhh, it's a possibility!", in reference to a then well-known catchphrase by Jerry Colonna.

THE END
OF
ADOLF
IF YOU BUY A STAMP OR BOND-
WE'LL SKIN THAT SKUNK ACROSS THE POND! 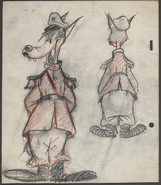 Retrieved from "https://metro-goldwyn-mayer-cartoons.fandom.com/wiki/Blitz_Wolf?oldid=5580"
Community content is available under CC-BY-SA unless otherwise noted.